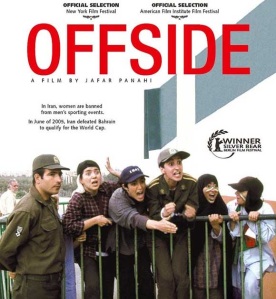 Powerful feminist piece reminiscent of Italian Neorealism. A “behind-the-scenes” film of several women who want to attend a soccer game in Iran but only men are allowed to attend. The women, many of which are disguised as men, are put into a holding pen for the game and this story is about them during the qualifying match.

I don’t believe it’s a coincidence that the women are not named. It’s Panahi’s nod to the culture not allowing women to have their own identity.

1) Where is it on following the Bechdel Test: 5

3) Strength of the directing: 5

5) Strength of the cinematography: 5

7) Strength of the sound design: 5

8) Strength of the production design: 5

View all posts by ashleypacini